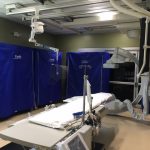 First Coast Heart and Vascular Center now has it’s own state of the art Cath Lab. First Coast Heart and Vascular Center is one of the few cardiology groups in North Florida to routinely offer transradial cardiac catheterization procedures, and our physicians have been perfecting this procedure for over 13 years. Our physicians are involved with training new physicians and already accredited interventional cardiologists in this technique.

First Coast Heart and Vascular Center opened its office based or outpatient cardiac & vascular cath lab on January 14, 2015. It is a state of the art Cath Lab facility and first system of its kind in the USA. We are honored to have been able to team with Schimadzu to get the latest version of cutting edge equipment that has the most advanced software and imaging system which makes the operator’s job easier, safer and that significantly reduces procedure time, radiation to both patient and operator and the amount of contrast used. the advancement in technology in this system is second to none.

The First Coast Heart and Vascular Center Cath Lab offers not only heart catheterization but also we are able to perform simple angiogram and intervention to most complex peripheral vascular procedures. Such procedures include: Carotid angiogram, renal angiogram, mesenteric angiograms, leg angiogram, abdominal aneurysm angiogram and the same for interventions. We use the latest in interventional technology from simple balloon angioplasty, simple stents to medicated stents, multitude of atherectomy devices including laser. We diagnose and treat all vascular beds from the neck to the feet (arterial or venous).